‘Wonders of the East’: Stein Exhibition in the British Museum Extension

A century ago, on 7 May 1914, the British Museum welcomed King George V and Queen Mary to open the new north wing of the Museum, the King Edward VII Galleries. Their visit was captured by Pathe News and also reported in The Times.1 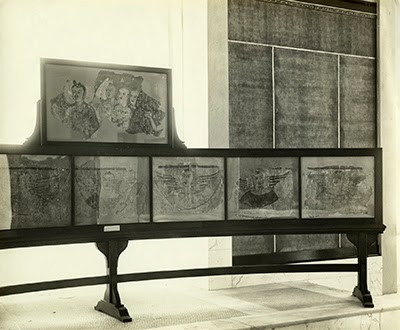 Stein Photo 28/7(4), Library of the Hungarian Academy of Sciences.

Staff had been busy for months preparing the opening exhibitions for the royal couple, and Thomas Humphrey Ward (1845–1926), Leader Writer for The Times, considered that ‘the most exciting part of the display’ were ‘the selected examples, several hundreds in number, of the paintings, embroideries, books, stucco relief, &c., which compose the amazing collections made in his last journey of exploration by Sir Aurel Stein’.2

The Stein exhibition was accompanied by a catalogue, Guide to an Exhibition of Paintings, Manuscripts and other Archaeological Objects collected by Sir Aurel Stein, K.C.I.E., in Chinese Turkestan. (London: The Trustees of the British Museum 1914). The introduction is reproduced below.

The present Exhibition is designed to show the most valuable results of the second journey of archaeological and geographical investigation carried out by Sir Marc Aurel Stein, K.C.I.E, in Chinese Turkestan and the adjoining western border of China, under the joint auspices of the Government of India and the Trustees of the British Museum. A previous journey made by Sir Aurel Stein in 1900-1901, of which the most important proceeds are exhibited elsewhere in the British Museum, had disinterred from the sands of the deserts of Turkestan abundant relics of a rich ancient civilisation deriving its chief inspiration from India. The included MSS. in Sanskrit, Tibetan, Chinese, and a hitherto unknown local language, containing texts of Buddhist religious works, official documents in a Sanskritic dialect, statuary, paintings on panels, frescoes and a large number of miscellaneous objects for the uses of public and private life. So much interest was aroused by these discoveries that several expeditions were sent out by Continental Governments, which excavated a number of buried sites in Turkestan with signal success. Sir Aurel Stein then proceeded to make preparations for a second journey on a larger scale. He set out in April 1906 from Kashmir, and passed northwards through Chitral, Mastuj, the Taghdumbash Pamir, and Tashkurghan to Kashgar. From Kashgar he started on June 23rd for Yakrand, whence he went on, still following the route towards the south-east, to Khotan. After some exploration of the mountain of south Khotan, he set out eastwards, and at Khadalik, near Domoko, and other sites in the neighbourhood unearthed some buried temples which proved to be rich in archaeological and literary treasures. Thence marching eastwards through Keriya to Niya, he opened up some ruins north of the Niya River, probably abandoned in the third century A.D., from which he extracted a surprising wealth of official documents and domestic miscellanea. From Niya his route led him in a north-east direction to Miran, where the remains of a Tibetan fort of the eighth or ninth century yielded an immense hoard of Tibetan documents and various other objects.

From Miran he advanced northwards through Abdal, across the Lop Desert, excavating on the way several sites, and returned to Miran, where he found in the ruined Buddhist sanctuaries some singularly attractive and interesting frescoes of purely Indo-Hellenistic type, probably not later than the fourth century. Thence he returned to Abdal, and set out in a north-easterly direction for Tun-huang. In the course of this stage of the journey he made the important discovery of remain of a very ancient Chinese frontier-wall, strengthened at interval by towers and guard-houses, which ran west and south-west from the region of An-hsi. Tun-huang (Sha-chou) was reached on March 12th, 1907, and almost immediately a visit was paid to the ‘Caves of the Thousand Buddhas’ (Ch’ien-fo-tung) to the south-east of the town. These caves consist of a large number of grottos, some of large size, cut in irregular tiers on the face of a rock, with walls adorned by ancient Buddhist frescoes executed by local artists in a style which is an offshoot of the Indo-Hellenistic school of Gandhara modified by Chinese influences. After this preliminary visit Sir Aurel Stein returned to the investigation of the frontier-wall which he had observed on his way from Miran to Tun-huang. It proved to date from the second century B.C., and to be identical with the lines running from Chiu-ch’üan (Su-chou) to the ‘Jade Gate’ or Yü-mên, thus forming a barrier securing the district south of the Su-lo River, which was the base for the political and military expansion of the Chinese Empire westwards. In tracing the course of this wall he discovered numerous Chinese documents dating from 99 B.C. downwards, large quantities of articles of military and domestic equipment, etc. This exploration completed, he returned to Tun-huang, and then to the ‘Thousand Buddhas.’ In the latter place, in a cell which had until recently been walled up for many centuries, and was now in the custody of a Taoist priest, was discovered an extensive library comprising many thousands of Buddhist and other MSS. and books, chiefly in Chinese, but also including many works in Sanskrit, Sogdian, Turki, Uighur, Tibetan, etc., together with hundreds of silk banners painted with hieratic scenes and figures, often of very high artistic merit. Negotiations with the guardian of this hoard were brought to a satisfactory issue, and in consequence an immense addition was made to the collections of the party.

After investigation of some other matters of local interest – among them the fine old frescoes in the Buddhist caves of Wang-of-hsia – Sir Aurel Stein proceeded across the Nan-shan mountains eastwards to Kan-chou, completing the survey of the wall, and then turned towards the north-west. After a short stay at Turfan, of which the ruins have yielded rich treasures to German and Russian archaeologists, he advanced in a south-westerly and westerly direction to Karashahr, and began excavations some fifteen miles south-west of the town on the site of some Buddhist shrines known as Ming-oi. The search was very successful, the site proving especially rich in beautiful stucco heads and wood-carvings. A march westward to Kuchar, followed by a bold dash southward across the Taklamakan Desert – which nearly ended in disaster – brought the travellers in February 1908 to Karadong, where they found considerable numbers of painted panels, inscribed tablets, and Sanskrit MSS. Some supplementary investigations having then been made in the neighbourhood, they arrived at Khotan early in April, and then again turned northwards through the Taklamakan. After a halt at the ruined Tibetan fort at Mazartagh, probably dating from the eighth or ninth century, which yielded hundreds of Tibetan, Chinese and other documents, they proceeded to Aksu, thence journeyed westwards and southwards to Yarkand and Khotan, and from Khotan made a toilsome march over the mountains southwards to Leh, which was reached on October 12th 1908.

Some idea of the great quantity and importance of the materials obtained in this journey may be formed from the following figures, which naturally are only approximate.

From the various sites excavated there were collected

A full account of his travels have been published by Sir Aurel Stein in Ruins of Desert Cathay (Macmillian, 2 vols., 1912). His official report and inventory of the objects discovered is still in course of preparation.

The present Exhibition is designed to put before the public characteristic examples of the various classes of objects before they are allotted to their final destinations. At present they are the joint property of the Trustees of the British Museum and the India Office, and it is with the assent of the Secretary of State for India in Council that the Exhibition takes place. The Exhibition is necessarily a temporary one, since the gallery in which it is held will shortly be required for other purposes. In arranging it the officers of the British Museum have had the constant co-operation of Sir A. Stein’s assistants, Mr. F. H. Andrews and Miss F. Lorimer.

The arrangement of the Exhibition commences at the eastern end of the gallery. The paintings, to which the first section of the Guide (pp. 5–24) is devoted, occupy the cases along the entire northern side. Returning along the southern side the visitor will find, first, the miscellaneous archaeological objects (pp. 24–38), and finally the manuscripts.

Over the next few months, we will post further extracts from the catalogue as well as the correspondence and reports in the British Museum and Aurel Stein archives (the latter at the Bodleian Library, University of Oxford) to trace the progress of this important exhibition and to highlight some of the objects on display. The complete exhibition catalogue with links to images of the exhibits will be published online on IDP at the end of this period.

Many thanks to Helen Wang, Marjorie Caygill and Sophie Arp for their invaluable research and generous help which has been used to prepare these posts.