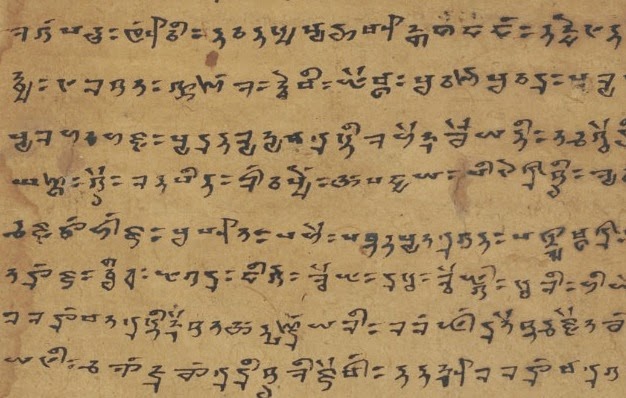 Phrasebooks still seem to sell quite well, judging by their presence on bookshop shelves. If translation apps do eventually make them redundant, it will be the end of a tradition that goes back a long way. The Central Asian manuscript collections provide plenty of evidence that phrasebooks were popular with travellers on the Silk Routes in the first millennium AD. For example, Pelliot chinois 5538 is a scroll with a series of phrases in Sanskrit and Khotanese, on the general theme of pilgrimage. Some of the phrases form conversations, like the following:

Do you have any provisions for the road?
I do not like my provisions.
I'll go with one or two horses.

We don't know whether this particular scroll (which dates from the late 10th century) was actually used as a phrasebook – it might have just been copied out as an exercise – but most of the phrases in it are relevant to the needs of a Buddhist pilgrim travelling from India to China.

Other phrasebooks are clearly for different sorts of travellers. The Tibeto-Chinese phrasebook, found in Or.8210/S.1000 and S.2736 (not yet digitized) was obviously compiled for merchants. The phrasebook gives the Tibetan word, followed by the Chinese equivalent, all in the Tibetan script. Thus it was clearly written for travellers who knew the Tibetan language but little or nothing of Chinese. In this phrasebook, the names of goods including food, clothes, tools, weapons and armour predominate. Phrases concerning buying and selling are also here, including 'last price' – a phrase familiar to those who have haggled in an Asian marketplace. There is also the polite 'thanks for letting me look'.

Also here are words and phrases helpful to visitors to a strange town looking for food and a bed for night, and moving on to the next destination. The phrasebook is also there for travellers who encounter problems such as illness, being robbed, or being accused of being a thief. They can use it to invoke the authority of the Tibetan emperor or a local official, or seek the help of a ritual specialist (bon po).

These are only two examples of the many phrasebooks and glossaries from Dunhuang and other Silk Route sites, but they cover two of the most important actvities on the Silk Routes in the first millennium: pilgrimage and trading. The Sanskrit-Khotanese phrasebook also has some revealing snippets of conversation that suggest another interest for travellers. After some phrases regarding the arrival of a Tibetan teacher, the conversation goes in this direction:

He is dear to many women.
He goes about a lot.
He makes love.

Which suggests that gossip was also a popular activity among Silk Route travellers over a thousand years ago!