The Diamond Sutra on display: Frontispiece

From today the whole text of the earliest dated printed book — the Diamond Sutra — will be on display at the British Library for the first time over a period of eighteen months between March 2014 – August 2015.

Following extensive conservation, the Diamond Sutra scroll currently remains in separate panels giving the unique opportunity to show all the panels in turn (see timetable below). Each panel will be on display for two months in the Treasures Gallery at the British Library, open to all and with free admission.

The first panel on display (March-April 2014) is the illustrated frontispiece showing the Buddha with his elderly disciple, Subhūti. The text of the sutra concerns the philosophical discussion between the Buddha and Subhūti. 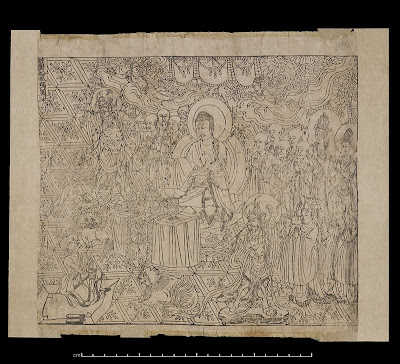 See the whole of the Diamond Sutra online on the IDP website.

Each panel will then be shown in turn, remaining on display for two months. The frontispiece will be shown again for the final display in July and August 2015.

The Diamond Sutra was printed in AD 868 as an act of faith and piety. In this period Buddhists took advantage of printing to replicate the words and image of the buddha, but private printers at the time also used the new technology to produce texts for profit. Almanacs were immensely popular, so much so that the Chinese emperor, whose imperial astronomers produced and distributed an imperial almanac, tried to suppress their printing and sale throughout the 9th and 10th centuries.

Displayed alongside the Diamond Sutra will be a copy of a Chinese almanac printed just a decade later, in AD 877. It is a very different style of printing with the document split into registers showing immense detail. They include the animals of the Chinese zodiac, a diary of lucky and unlucky days, fengshui diagrams, magic charms and much more.

The display also includes two pages from a printed copy of the Heart Sutra in Sanskrit with a phonetic transcription in Chinese, an early example of Korean printing using moveable type and the earliest examples of Japanese printing, the Million Charms of Empress Shotoku.

‘The Diamond Sutra and Early Printing’ 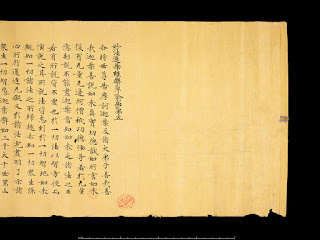