A Few of Our Favourite Things: #14 Nicholas Sims-Williams After studying Old and Middle Iranian languages and related subjects at Cambridge, Nicholas Sims-Williams has spent his whole career at the School of Oriental and African Studies, University of London, where his teaching has covered seven Iranian languages (Avestan, Old Persian, Middle Persian, Parthian, Choresmian, Bactrian, Sogdian and Khotanese) and occasionally Syriac. Although he has published on all of these languages, he has concentrated on the Middle Iranian languages of Eastern Iran and Central Asia, in particular Sogdian and Bactrian. He is equally interested in the languages themselves, with their Indo-European roots, and in their Central Asian setting, with its stimulating mixture of languages, cultures and religions. In addition to a two-volume edition of Sogdian inscriptions from Northern Pakistan and a three-volume edition of Bactrian documents from Northern Afghanistan, his books include studies of many manuscripts in the IDP, such as documents in mixed Sogdian and Old Turkish from the London and Paris collections and Christian Sogdian and New Persian manuscripts in the Berlin Turfan collection. 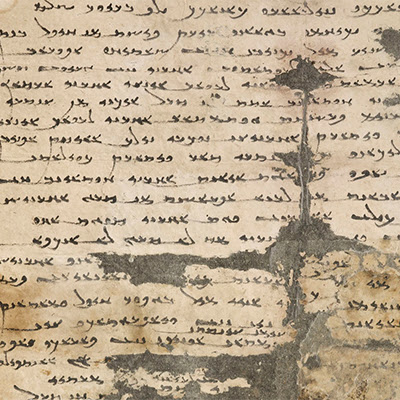 In 1907 Aurel Stein discovered a cache of early paper documents at the site T.XII.a to the west of Dunhuang, a guard-post on the wall protecting the western border of China. These are known as the ‘Ancient Letters’ because they are among the earliest documents written in Sogdian, a language of the Iranian family formerly spoken in Sogdiana, the region around Samarkand in present-day Uzbekistan, and in the numerous trading colonies established by the Sogdians along the route to central China. The Ancient Letters represent the contents of a postbag lost in transit from China to the west, perhaps confiscated by the Chinese authorities. Written by Sogdians in Xinjiang and Gansu and addressed to their compatriots in Sogdiana or Loulan, the letters provide a unique glimpse into the lives of the Sogdian merchants on the so-called ‘Silk Road’.

Several of these letters could easily have qualified as my favourite item — no. 6 (Or.8212/97), the only one which actually mentions silk, or nos. 1 (Or.8212/92.1) and 3 (Or.8212/98), two letters written by a woman abandoned in Dunhuang by her husband — but I have finally chosen Letter no. 2 (Or.8212/95). This letter was written by Nanai-vandak, a Sogdian agent stationed somewhere in Gansu, possibly in Jincheng, and addressed to his partners in Samarkand, the capital of Sogdiana, over 2,000 miles to the west. Perhaps because of the distance it had to travel, it was protected by an inner wrapper of brown silk and an outer envelope of coarse fabric which bears instructions for the delivery of the letter. The letter, which was probably written in June or July 313 AD contains news of momentous events in China: a severe famine in the capital Luoyang; fighting between the Huns (Xiongnu) and the Chinese; the flight of the emperor; and the sack of the cities of Ye (in 307) and Luoyang (in 311).

While the main importance of this letter lies in the historical data it contains, what I find particularly affecting are the paragraphs with which it ends, a poignant last will and testament. Nanai-vandak regards the events described as bringing to an end the world as he knows it and foresees nothing but ruin and death for himself and the other Sogdian merchants in China. Since he does not expect to return home, he asks his correspondents in Samarkand to look after a large sum of money which he had left on deposit there, to invest it on behalf of the orphan Takhsich-vandak, presumably his son, who is still a minor, and to find him a wife when he comes of age. But of course his letter never reached its destination, so it is unlikely that its provisions were ever carried out. We can only speculate as to what became of the father and his son: did Nanai-vandak survive and return home? and did his partners find a wife for Takhsich-vandak and hand over his inheritance?

Why dedicate your life to deciphering 4,000-year-old tax returns? published in the Sunday Times on 2 February 2014 by John Preston about long-lost languages features Nicholas Sims-Williams discussing his work on Sogdian translation. It is available to read online or download in PDF format (5.1MB).