A Few of Our Favourite Things: #13 Stephen F. Teiser 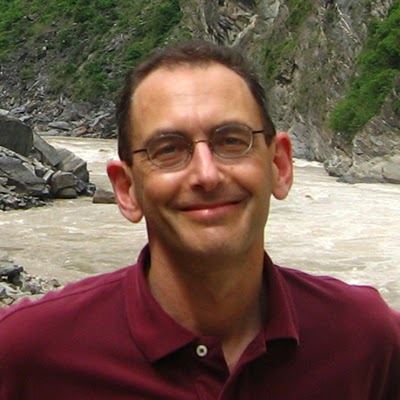 Stephen F. Teiser teaches history of religions at Princeton University, where he is D.T. Suzuki Professor in Buddhist Studies and Director of the Program in East Asian Studies. He is interested in the interaction between Buddhism and indigenous Chinese traditions, brought into focus through the wealth of sūtras, non-canonical texts, and artistic evidence unearthed on the Silk Road. An updated edition of his 1994 book on concepts of hell (The Scripture on the Ten Kings and the Making of Purgatory in Medieval Chinese Buddhism) will soon be published in Chinese translation. His current research, tentatively entitled Curing with Karma, focuses on Buddhist liturgical manuscripts from Dunhuang.

His chosen item is Pelliot chinois 2583, a Chinese scroll from the collections of the Bibliothèque nationale de France. 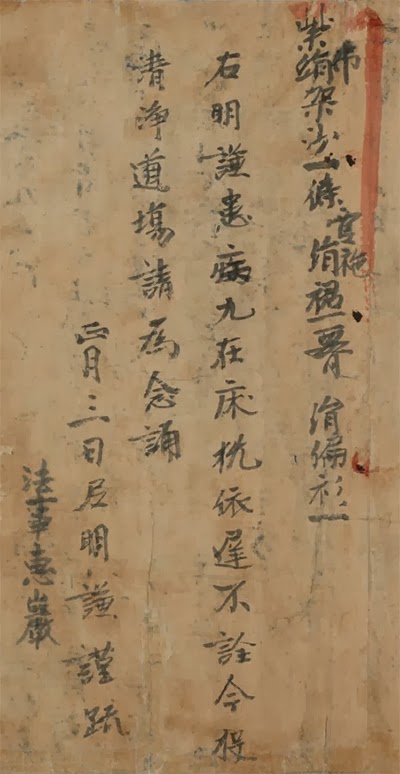 Pelliot chinois 2583 is a scroll composed of thirteen sheets of paper originally written one at a time. Each sheet was a liturgy accompanying a single ritual act of donation on behalf of Dunhuang’s nuns, monks, and laypeople. Some of the rites were intended for healing sickness; others were documents used in memorial observances or the distribution of nuns’ clothing after death. Most of the prayers are short, occupying less than half a sheet. The detail of the page shown here (verso, sheet 4) opens by listing the type and amount of items offered: 'One piece of purple hanging silk (crossed out and corrected: cotton), one set consisting of official robe and silk skirt, one silk side-buttoning blouse.' The next two lines contain the liturgy proper, explaining that a nun named Mingqian has been sick, dedicating the donation’s merit to her cure, and asking that chanting accompany the rite. The fourth line records the donor’s name, the date, and a benediction. The last line seems to be the signature of the monastic official responsible for the disposition of the gift, a monk Huiyan.

Both sides of this fourteen-foot long scroll are fascinating. The side now labeled verso by the Bibliothèque nationale was actually composed first, each sheet a written artifact of a ritual performance. The rites were undertaken on behalf of otherwise unknown local people during the period of Tibetan rule (786-848). The prayers provide refreshingly concrete, direct witness to the worries and hopes, the simple words and possessions of the performers. Later, someone collected all thirteen liturgies and pasted them end-to-end in scroll format, whose verso side (now labeled recto) was used for recording two more texts. The first, main text is a Chinese-language commentary authored by the most prolific bilingual monk at Dunhuang (Tibetan name: Gö Chödrup, Chinese name: Wu Facheng), on a Buddhist scripture on causality and the Four Noble Truths, The Rice Stalk Sūtra (Skt.: Śālistambhaka-sūtra). The second, shorter text on this side of the manuscript is a partial calendar for the year 821, written upside-down and beginning from the end of the manuscript. For each day the almanac lists reigning deities; correlates for cycles of weather, sun, and moon; types of activities deemed lucky or unlucky; and so on.

The ensemble of the scroll’s two sides makes this my favorite manuscript in the Dunhuang collection. The texts offer elaborations of core Buddhist teachings plus hemerological calculation of lucky and unlucky days, all constructed on the back side of humble liturgies transferring merit to nuns, monks, and laypeople.