A Few of our Favourite Things: #11 Helen Persson 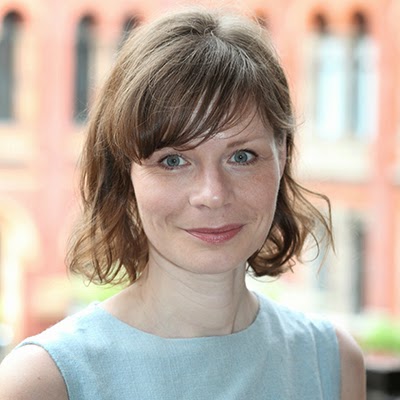 Helen Persson has been at the Victoria and Albert Museum, London, since 2001 and is curator of Chinese textiles and dress, in the Asian Department. Her first degree is in archaeology from the University of Stockholm and her second is in History of dress from the Courtauld of Institute, London.

Helen’s interest in Central Asia focus in particular on the exchange in textiles; in motifs and technologies during the first millenium and how the textiles can help us understand the societies where they were made and used. Her interests also include fashion and identity. She has lectured and published extensively on textiles from the Silk Road, among others Textiles from Dunhuang in UK Collections, edited by Zhao Feng (2007), and most recently on Chinese silks for the Mamluk market in a Centre for Textile Research publication (forthcoming).

Her chosen item is a hemp shoe found by Stein in the Limes watchtowers, north of Dunhuang. 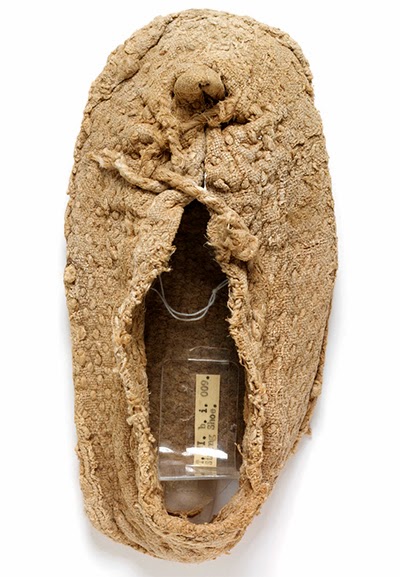 Shoe, plain weave in hemp and hemp string, ca. 100 BCE – CE 100. LOAN:STEIN.344 (T.VI.b.i.009).
© Victoria and Albert Museum, London
On loan from Government of India and the Archaeological Survey of India

Well, I do like shoes and this peculiar looking and old shoe is very special. Although the shoe's original functions were practical and protective, there is a clear design element to it. The utilitarian everyday object has decorative features as well, showing human's desire to embellish even the simplest of artefacts. The shoe was discovered in a refuse heap, discarded most likely because of worn holes in the heel and the ball of the toes. The upper is made of two or more thicknesses of strong plain woven hemp or cotton, bound together by even rows of hemp string, producing a pattern of dots all over. The process of sewing two or more layers of materials together to make thicker padded material is like quilting and just as in quilting, the stitching has become both functional and decorative. A drawstring is threaded around the upper edge, which by a clever method of crossing near the instep restricts the size of the opening and draws up the slack of the fabric over the toes into a sort of point. This has created a curious profile of the shoe, like a horn. The thick sole has warp of hemp cord placed lengthways with weft of string plaited in a ‘wrapped-twined’ manner. Furthermore, the entire sole is covered with tight knots of string, which would have the effect of the hob-nailed military sandals of the Romans or the climbing nails in a modern boot. The knots would have made walking on the sand in the Taklamakan Desert much easier. This type of sole can also be seen in the footwear of the terracotta soldiers from Xi’an, showing that this sort of footwear is not a single occurrence but most likely had a long tradition. It would most likely have been worn as an outer shoe, i.e. over a thinner cloth shoe.

This shoe was recovered from the site known as the Limes Watchtowers, which actually include several different sites of fortified encampments north of Dunhuang in northwest China, along the edges of the Taklamakan Desert. They were designed to ensure the safe transit of goods across the area and served as a base for expansion into Central Asia. Within the towers Stein found an astounding range of artefacts, which provide a glimpse of garrison life and military operations under the Han empire, including bronze mirrors, coarse pottery, tools, leather armour, weapons, shoes, and clothing. Ancient documents included personal letters on silk and wood; military directives and supply lists; and treatises on a range of subjects, including medicine and astrology. This shoe was found at the garrison station named by Stein as T.VI.b, where many Chinese documents dating from 68-56 BCE were found – indicating that this artefact is among the oldest shoes in the V&A collection.

This shoe is one of my favourite Stein objects, as it is an everyday object which basic form is functional, but been created with ingenuity and some decorative elements. It contributes to the story of Central Asian life during the Han dynasty.