A Few of Our Favourite Things: #2 Agnes Kelecsényi and Kinga Dévényi

Agnes Kelecsényi (left) and Kinga Dévényi (right) are curators in the Oriental Collection of the Library and Information Centre of the Hungarian Academy of Sciences in Budapest, where Stein’s bequest is preserved. They have been strongly involved in disseminating knowledge about this collection including various digitisation and cataloguing projects with IDP. Their chosen item is Aurel Stein's manuscript of the Sand-buried Ruins of Khotan. 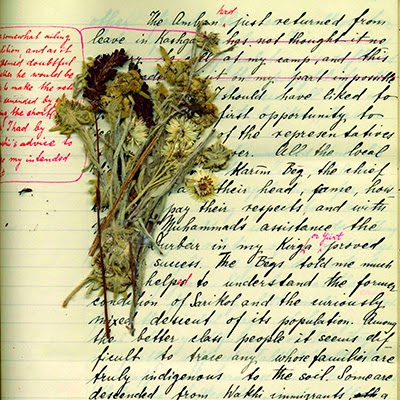 This manuscript was donated to the Hungarian Academy of Sciences by Stein as a part of his first donation of books to the Academy of his native land.

It is our favourite item because his neat handwriting and scarce amendments reflect his scholarly way of composing and his well disciplined character. While the dried flowers put among the leaves of the manuscript, and which are from the Mohand Marg, his mountain retreat in Kashmir, are a sign of his tender heart, love of nature, and spirituality.