Briefly introduced here are pieces from the museum that will join the IDP database through the current project. Reflecting the goals of the museum, these works consist of various media and came from various sites.

Two pieces belong to the Avery Brundage Collection, which consists of over 7,700 pieces. The first piece is the Bodhisattva Avalokiteśvara with Willow Sprig (B62D10) from Dunhuang, dated approximately to 800-900. Painted on ramie, this bodhisattva holding a willow sprig exhibits great similarity to a series of bodhisattva paintings housed now in the Musée Guimet and the British Museum (especially to MG.17783).

The second piece from the Brundage Collection is the Bottle Vase (B60P506) from the Tangut (Xixia) Empire (1038-1227). A wide unglazed band around the shoulder has been identified as a feature of Tangut jars. Another Tangut piece is the Buddhist deity Green Tara (1992.59), who personifies compassion in action and is the female counterpart of Amoghasiddhi, one of the five important Buddhas of esoteric Buddhism. The IDP database has been incorporating collections of Tangut manuscripts from St. Petersburg and London, and this and other paintings and artefacts will enable the database’s users to access both the manuscripts and material culture of this prominent culture. 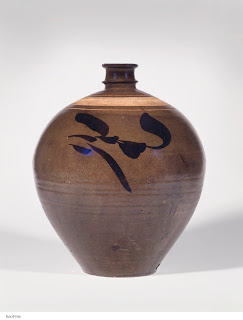 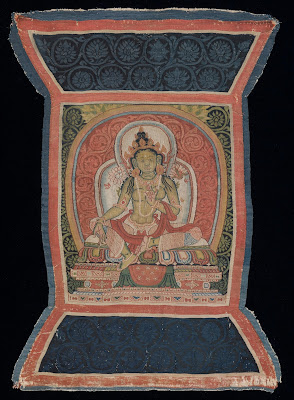 The fourth and fifth pieces are both from the Kucha region. The Head of a Buddhist Deity (B79D2), painted with sensitive brush execution, is attributed to the Simsim Caves. According to its provenance record, this piece was originally found by Albert von Le Coq (1860-1930) in 1913. Le Coq presented it to Lucien Scherman, father of the piece's donor Dr. Richard P. Scherman. While its original location in the Simsim Caves awaits further discussion, the details of the face and curly black hair resonate with those of the figures in Cave 48. Also attributed to the Kucha region is the Bodhisattva Avalokiteśvara (2004.23), a small wooden sculpture dated to 600 – 700. 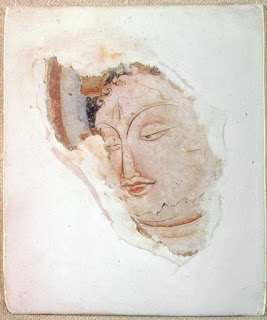 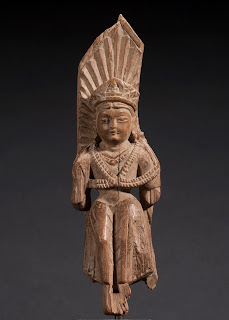 The next piece is the Fragments of calligraphy (2014.47), an album that contains six fragments of Chinese calligraphy allegedly discovered in the Turfan region. Three of them contain dates in era names, indicating 733, 791 and 729, respectively. This piece will be featured in the future blog post on North American collections. 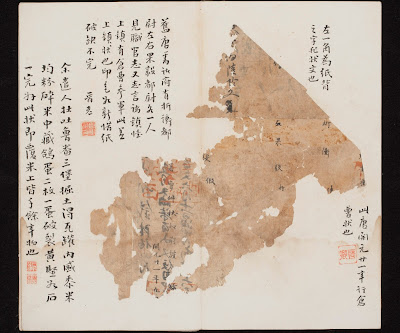 The final piece is the Standing Buddha (B87B3). This rectangular plaque (28.2 x 17.1 cm), made of iron with gold and silver inlay, is a very intriguing piece. Sold in an auction in 1985 and then purchased from an art dealer, this piece’s previous owners and original provenance are unknown. However, many aspects of this figure closely resonate with buddha figures of the praṇidhi murals in the Bezeklik Caves: the standing posture with a three-quarter view of the face, drapes of the robe, and personal adornments which are not usually worn by buddha figures. One of them from Cave 20 especially shares similarities to the Buddha on this iron plaque. Based on this stylistic similarity, the piece has been dated to the tenth to eleventh centuries. While metal votive plaques or mirrors with Buddhist images existed in other parts of Asia around that time, there have not been any comparative pieces with the images of the praṇidhi buddhas. What do IDP blog readers think about the original function of this piece? 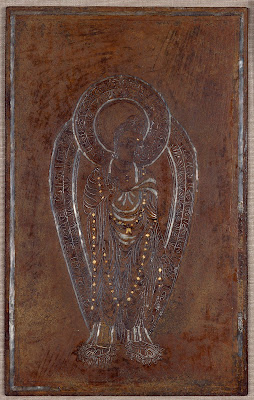 I would like to express my sincere gratitude to the Asian Art Museum of San Francisco, Dr. Li He, Ms. Jamie Chu, and Mr. Jonathan Bloom for their help and support for the Georgetown-IDP Project.